Tradition and Innovation: Japanese Ceramics Now brings together twenty-five of the leading ceramics artists from across Japan. Most of these artists are widely recognized and critically acclaimed in Japan, few have exhibited here in the United States. This exhibition truly is a must see experience here at Frederik Meijer Gardens & Sculpture Park!

Continuing our series introducing you to the artists who are a part of our 2015 ArtPrize and fall exhibition, here are five more artists to get to know:

TWINS – for Maple in Minneapolis by Naoto Nakata 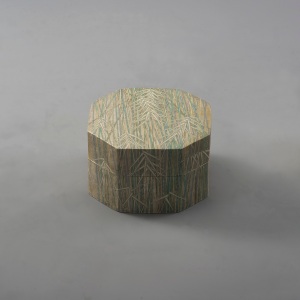 Nobuyuki Ogawa – Phantom – Vote Code 61018
“With the mental image of a flower as the motif a skeletonized thing was formed.”

Sayaka Oishi – Accessories – Vote Code 61360
“Whenever I create I always think about the ties between forms and accessories. I also try to make good use of the glaze which is original to ceramics. There are many animal and plant based accessories around the human in my work, but these all represent ‘greed’ and ‘nature’.”

Junji Setsu – Irosuminagashi “Moon Flower” – Vote Code 61791
“I imagined a beautiful picture in which the moonlight lights up the surface of water at night. This piece can also be seen as a flower, which is why I named it “Moon Flower”. The Irosuminagashi technique which I created myself makes it possible to capture one moment in nature. This seems to be connected with the fleeting beauty of life. It was created with the feel of the Japanese concept of beauty and nature. Irosuminagashi was created by myself and nature conversing and coming into harmony, and I think that the appealing part of this technique is that you can never make the same pattern twice.” 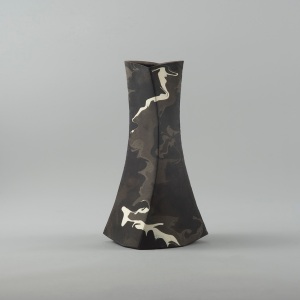 For centuries, functional and decorative ceramic arts in Japan have been appreciated and collected across the globe. In many ways, Japanese ceramics have become iconic references for Japanese culture at large. Tradition and Innovation: Japanese Ceramics Now illustrates that ceramics are a living and expanding tradition, and many of today’s leading artists are highly inventive, exhibiting great creativity in form, content and technique.

Continuing our series introducing you to the artists who are a part of our 2015 ArtPrize and fall exhibition, here are five more artists to get to know:

Yucho Kobayashi – Shigaraki Rippled Large Jar – Vote Code 61968
“As someone who actually makes Shigaraki pottery using the long-standing traditional anagama kiln, I tried to fire an organic large jar with a rippled pattern in an anagama kiln with innovation in mind.”

Atsuko Kubota – Pale-blue Glazed Geometric Patterned Platter – Vote Code 62522
“The geometric pattern of this blue porcelain (pale-blue glaze) platter is a continuous structure of a repeating pattern of squares rotated twice. Over the spread latticework, squares open vertical and horizontal gaps, regularly overlapping, the lattice under the arrangement of the the squares does not overlap at an angle. The process of arranging distinct geometric patterns is the same abstract expression as a music composer. Finding a new geometric effects is a great pleasure. Although such designs are readily expressed in drawing, it is very difficult in pale-blue porcelain.”

Toru Kurokawa – Garden – Vote Code 61002
“This work was created in a primitive way, with the shape, structure, patterns, and the anagama kiln being brought into effect. I wish for people to rethink their ties with nature, and wonder about their identities as a race.”

Jun Matsumura – S.S.T.P. – Vote Code 61632
“A super flat era was the background for making the tea pot. This craft evolved alongside lifestyle. In the functional designs that are selected, I incorporate the expression of my modern life in the form.”

Chiyo Nagaoka – First Stage – Vote Code 61432
“Prologue of “the form of the vessel within me” that continues to move without having to stay. Wishes and prayers are pictured as if they are spun with thread.”

Tradition and Innovation: Japanese Ceramics Now is a highly unique exhibition bringing together 25 of the leading ceramics artists from across Japan. Although most are widely recognized and critically acclaimed in their native country, few have exhibited in the United States – making this a must see exhibition experience.

Over the next few weeks, we will be introducing you to the participating artists in their own words and showing you their works. All 25 masters participating in the exhibition are Japanese, making this the first all-national venue in ArtPrize history!

Kunihiro Akinaga – Mimesis – Vote Code 61089
“I use the bones of animals for my theme – decoration. I form and design the patterns on each bone and copy them on to a paper pattern and create them using the hand forming technique. After firing, I put all of the parts together in a skeletal structure. My image of decorations are the excess decorations of temples and churches – the view of the world between life and death. I also feel that by decorating, the truth of things gets hidden. For example, in our lives the packaging and decoration of our food diverts our attention from the death of animals. By using the concept of decorations you can find modernity even in something universal such as life and death.”

Tadami Hirota – Gold and Silver Colorful Bush Clover Pattern Small Container with Lid – Vote Code 61021
“The bush clover that sways in the wind appears often in “Manyoushuu”. I expressed lovely, beautiful curves in the form of a round container with a lid.”

Tetsuya Ishiyama – Inlaid Colorful Earthenware Pot – Vote Code 61239
“By using an inlaid technique I created a geometric pattern, by which I expressed the stereoscopic effect of overlapping cloths.” 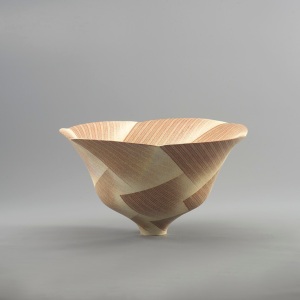 Seigo Kaneyuki – Band of Light  – Vote Code 61153
Created by its original technique called “Ligne Hotaru”, it has developed from the traditional Japanese technique “Hotarude”. Its delicate lines of light take us to the other side of everyday life.

Band of Light by Seigo Kaneyuki

This week we’re featuring three remarkable pieces from Phase Two of the collection, which will be on display March 28-June 4, and is devoted to themes of spring: This meticulous work is on loan from the Museum of Omihachiman City—Grand Rapids’ Sister City in the Shiga Prefecture. It is a perfect scale model of a traditional Japanese kitchen and its wide range of instruments and utensils. Originally, it would have been commissioned by a wealthy merchant family for young children. More than simply a toy, it would have been essential to their success in future life. Note the complete mastery of numerous materials in wood, metal and ceramic, which replicate everyday objects in minute detail. 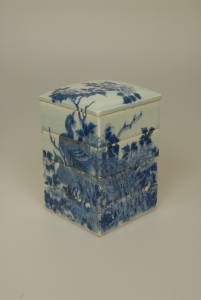 Koto Ware, a highly refined form of ceramics from Shiga Prefecture, flourished in 19th century. The kiln where this nest box was created opened in 1842 in the city of Hikone, and produced luxury items until 1862. The delicacy and decoration of Koto Ware was the antithesis to the irregular shape and earthy colors and textures of Shigaraki pottery.

This multi-tiered stackable box was meticulously made and decorated by hand. The square shape and flat bottoms of each level would have been difficult to create and could only have been produced by an artist of the highest skill. It originally functioned as a type of luxury lunch box perhaps given as a royal gift and used only for special guests.

The namesake decorative elements of the peacock and peony are found across the exterior. Such forms were undoubtedly influenced by the art of China. So too, the use of porcelain with blue underglaze also evidences an interest in Chinese art and pottery. This figure represents the central deity of Esoteric Buddhism. Simply put, he represents the Supreme Buddha seated atop the iconic lotus flower. Traces of gold leaf can be found across the surface of the cast bronze figure suggesting the prominence of the sculpture. An extremely rare loan from the Binman-ji Temple, this sculpture is among the oldest objects on display in this exhibition. Located in the rural city of Taga Town, this temple was one of the most visited and prosperous temples of medieval Japan (13th-16th century).

The firmly seated position and contemplative demeanor are iconic for Buddhist statuary. Although the body and floral form are decidedly iconic, there is a strong vertical structure to this composition. One can easily follow a visual central core that stretches from the conical headdress through the torso of the figure down to the pedestal upon which the Buddha rests. Such a strong central core grants the illusion of monumentality to the sculpture.

Throughout the course of Splendors of Shiga: Treasures from Japan, we’ll be featuring some of our favorite works of art from the exhibition and providing a more in-depth look at some of these pieces.

This week, we’re featuring two pieces of sculpture from the collection:

This rare sculpture from the 8th century describes the infant Buddha. According to tradition, the infant took seven steps from his mother, pointed to the heavens and declared he was venerable on both heaven and earth while under his feet lotus flowers bloomed. The sculpture describes a very young figure pointing to the heavens with his right hand and to the earth with his left hand; beneath his feet is a stylized representation of a lotus flower. Figures such as this were placed on display at festivals celebrating the Buddha’s birth on April 8. Then, it would have been surrounded by flowers and sweet tea poured over the figure. The latter possibly accounts for the surface colors seen today.  On loan from the Daiko-ji Temple, it is one of several Buddhist devotional figures and accessories which will be on display over the course of the exhibition.

The ancient bronze shown above,Seated Senju Kannon, is on loan through the Kannon-ji Temple located on the shores of Lake Biwa in the center of the Shiga Prefecture. It represents the God of Mercy who, according to Buddhist beliefs, has the highest rank after the Buddha himself. The figure is described with multiple arms at his sides and multiple heads atop his head symbolizing a thousand armed and a thousand eyed deity capable of managing everything in the universe and able to save all situations in the world. A subject of great devotion, this deity also appears frequently in traditional paintings from the 16th through the 18th centuries. Careful observation of this bronze form reveals traces of gold leaf indicating the sculpture was at one time completely gilded. This is another of the several Buddhist devotional figures and accessories that will be on display over the course of the exhibition.

Click HERE to learn more about our Splendors of Shiga: Treasures from Japan exhibition.